ANTAN Créations > Blog > >The Story of the Pocket Square

The Story of the Pocket Square 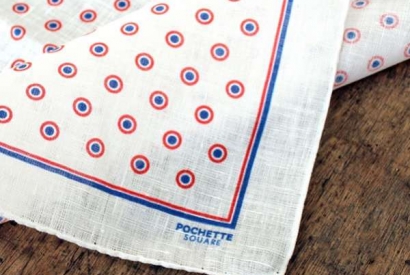 The pocket square finds its origins during the Antiquity, in Egypt, Rome or Greece. The wealthiest used a white linen square as a handkerchief. This practice carried on during the Middle Ages in Europe, where the most well off used a silk handkerchief imbued with fragrance to protect their sense of smell from urban miasma. King Richard II is often considered as the inventor of the first real pocket square as a fashion accessory that he used to prefer with loud patterns. In France, the pocket square is also a regular feature in the court of Louis XVI, where they usually made from silk and embroidered. Beyond its utilitarian trait, the handkerchief is already a fashion accessory that keeps evolving. Paisleys patterns rapidly find their places on silk handkerchief whereas white pocket squares with a coloured edge are a more tardive invention, dating from the Ottoman Empire at the end of the XVIIIth century. The rise of the two pieces suit during the XIXth century sees the pocket square become a useful accessory to an aesthetic one that men start to wear in the breast pocket of their jackets. At that time it was pretty common to see men carry two handkerchiefs, one in their pocket that had the role of a tissue and another one in their jacket as a fashion garment. The apparition of industrial tissues make the handkerchief obsolete, and we see the rise of the pocket square as we know it today, a decorative accessory, a trend that is confirmed during the Fifties in the United States, where men start to have fun with their outfits.

During the XXth century, the pocket square is well installed as a sign of the most elegant gentlemen in the Western world. The technical evolutions allow for more varied designs and an array of colours and patterns. Several Hollywood actors start to wear the pocket square such as Cary Grant, Gary Cooper or Frank Sinatra that help democratise the pocket square.

The pocket square takes a setback during the Eighties and Nineties before making a welcome come back in the Noughties, a come back pushed by a trend for the vintage and series such as Mad Men, one of our favourite tv shows, starring Jon Hamm as an advertiser during the Sixties. The pocket square is today a white canvas that can be ornated from the most classical to the most fantasist patterns ; more than a "piece of cloth" an accessory that will a touch of panach, the final touch of your outfit.